Your Body. Your Brain. Your Way.

After investing time, money, and sweat in developing the Core Flyte, we wanted to know whether people were actually interested in our product. [Hint: turns out the answer is a resounding “yes.”] With the support of talented Columbia University graduate students, we embarked on a comprehensive effort to better understand fitness trends and demand for the Core Flyte. We conducted hours of focus groups, tested prototypes with dozens of trainers and their clients, and launched a large quantitative survey. We learned a lot about why people are interested in the Core Flyte. Another cool outcome of our extensive research was that we developed some intriguing insights about how and why Americans exercise.

Our online survey was completed by 688 respondents, demographically representative of the U.S. population, and offers some insightful nuggets. In this week’s blog, I’ll focus on what we learned about gender and exercise. Over the coming weeks and months, I’ll share some more interesting survey results.

We all know that women and men are different… Writing, reading, and talking about those differences is a common pastime for many of us. John Gray’s Men Are From Mars, Women Are From Venus was the best-selling non-fiction book in the 1990s for a reason: people are constantly trying to figure out the opposite sex. I can’t promise our research will help your dating life or teach you how to avoid fights with your spouse, but it will help you understand the ways men and women are similar, and where they are different, when it comes to fitness.

Disclaimer: None of these findings should lead anyone to believe all women and all men exercise in the same way. In fact, in our results, you’ll see variations within each gender. The purpose of sharing these findings is to open up a dialogue on overall trends, not to build upon pre-existing stereotypes.

1. Overall, our fitness levels are comparable.

All of the survey data is self-reported. Assuming people are honest in an anonymous survey, we found that men and women have roughly the same fitness levels. Roughly 40% of each gender view themselves as very, or somewhat, out of shape, and 20% believe they are very, or somewhat, fit.

2. We exercise just as often.

The frequency of our workouts is quite similar, with about 70% exercising once or more per week.

3. Our choice of workout locations is similar.

Home is the most common primary exercise location, followed by outdoors and the gym. There is no significant difference between men and women here.

Why these similarities matter: We can work out together. Men and women have similar fitness levels and cadences of working out. And most people exercise in the home or outdoors, which allows greater flexibility. The dynamics of a couple exercising together will be a topic for another blog, but there's no reason why we can't make efforts to work out with our spouse or partner, schedules permitting.

Differences. Although our fitness levels, exercise frequency, and preference of workout location are comparable, a clear pattern emerges around gender differences:

1. Men and women target different body parts when they exercise.

We asked survey participants which areas of their body they target when they work out. Both legs and core are key focal points for both genders. However, men target their arms and shoulders twice as much as women and target their chest over 10 times as much as women. While men are focused on bulking up their arms and chests, women target their hips and butt five times as much as men. I think it’s fair to say that men tend to prioritize their glamour muscles – chest and arms – while women seek a toned bottom. 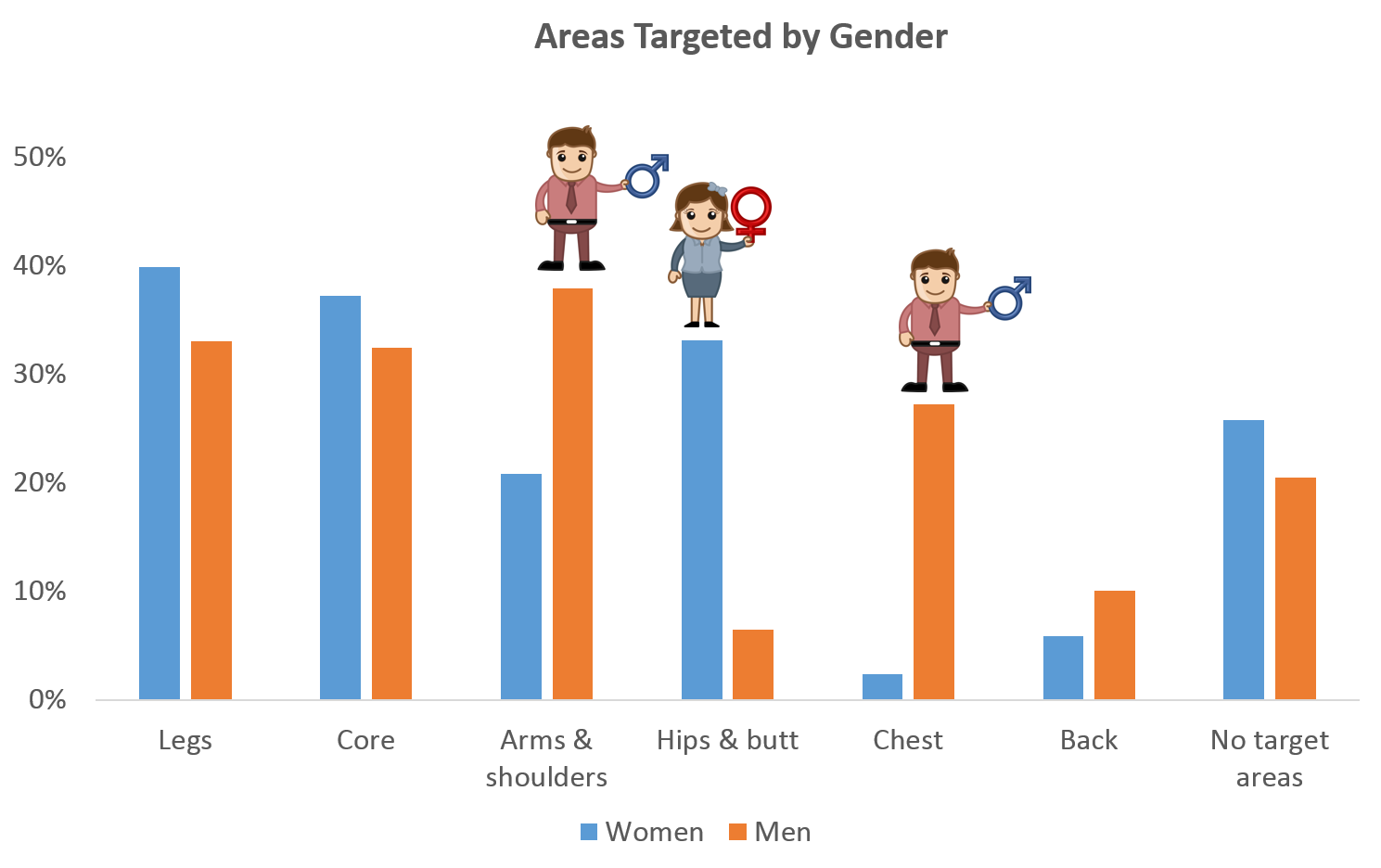 Why these differences matter: We often neglect areas by focusing on only a couple hot spots. Building muscles helps burn fat – no matter where those muscles are. We've all seen the guy at the gym who looks like Mr. Universe from the waist up, but has chicken legs. Not healthy. Performing exercises that activate major and secondary muscles helps develop a balanced and stable body.

As men and women target different areas of the body when exercising, it’s not surprising that the exercise routines we engage in vary as well. Weightlifting is much more common for men compared with women. Yoga, Pilates, and group fitness, however, are preferred by women. What does weightlifting generally do? Builds those glamour muscles. What about Yoga/Pilates/group fitness? Women tone up those butts and hips. Men also engage in competitive sports at five times the level of women. This shouldn’t be too surprising, as men play team sports more often. What I found a bit surprising, however, is that 41% of men report running, compared with only 26% of women. 70% of men ages 18-22 run, compared with 37% of women. This gap continues as age increases, but is most pronounced at younger age groups. This is a bit perplexing. After some digging, we found that men take part in a larger variety of activities – including running. Our survey indicates that men are involved in a broader range of exercise routines, and they tend to start running earlier in their lives in comparison with women. 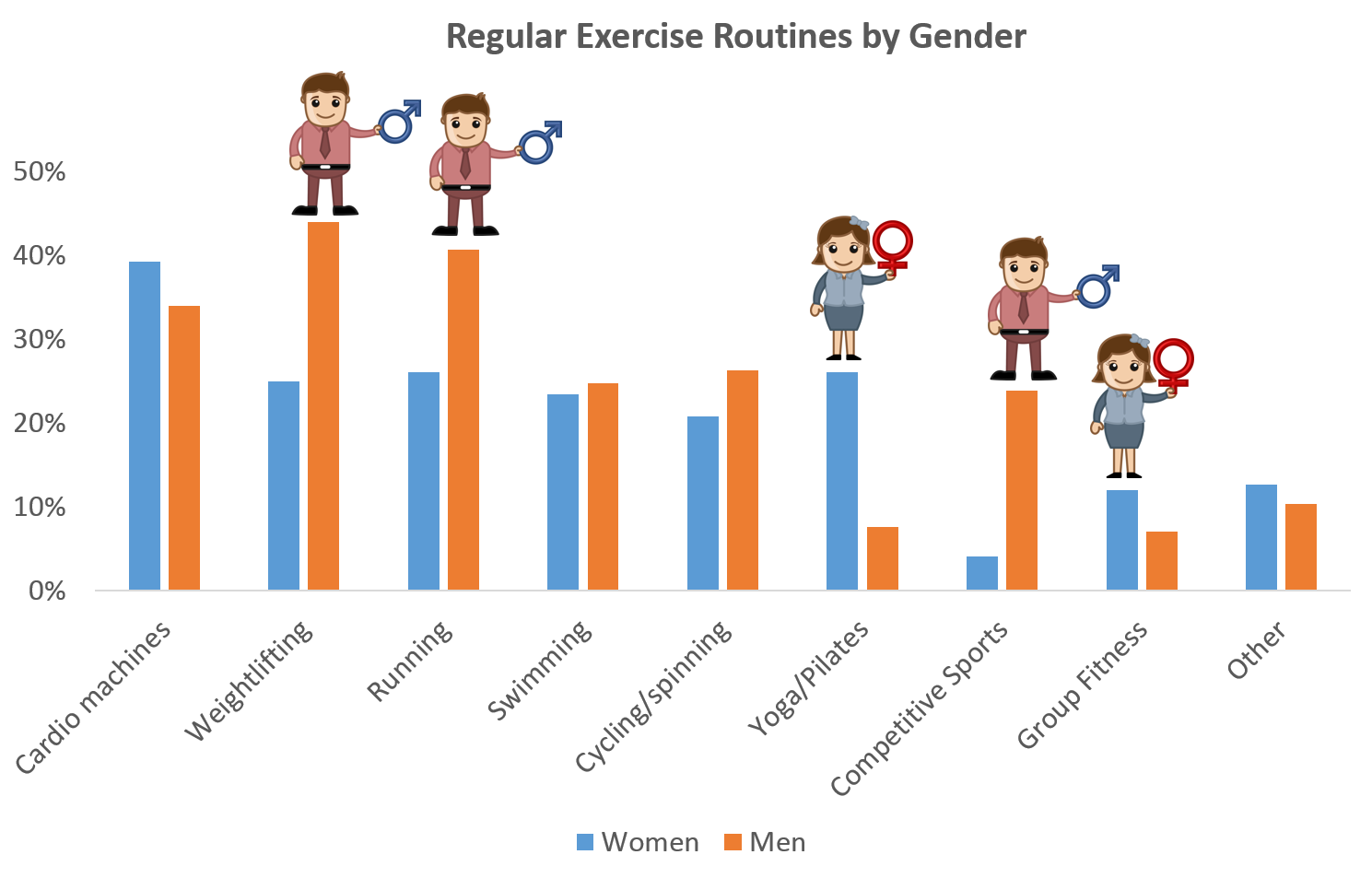 Why these differences matter: Men don't have a monopoly on lifting weights, just as women don't own yoga. Both can help us all stay fit. I can tell you from personal experience that Pilates is a challenging workout, and that the hardest day of p90X for me was the yoga workout. Cardio and circuit training are critical for an all-around workout. We should be more open to trying new things. As I frequently say, try something new. Mix it up.

We'd love to hear from you. What has been your experience with the role of gender and exercise? Comment on our Facebook page at facebook.com/flytefitness or tweet us at @flytefitness.

X
Active Minds has programming on campuses across the country that help reduce the stigma associated with speaking out about issues related to mental health. Its programs on over 700 campuses impact over 5 million students. Please note that a small processing fee (3%) is removed and we do not provide tax receipts.